How do you start a gig in a not quite filled room of awkward teenagers, parents and the half-drunk middle ground? Well if you’re a vocalist in The Blackout like Sean Smith you climb in the crowd and remain there for the first five songs. After a brief roam around the venue and starting the mosh pits himself, the spirits are high and self-awareness is low.

Following a chaotic start, Sean shakes all of the adoring fans off his back (literally) and took back to the stage. This is where he and the rest of his merry band of welsh rockers delivered such crowd favourite as “This is why we can’t have nice things” as well as new tracks such as ”Running Scared.” A mixed set keeps the crowd in the palm of their hands as we are took through ever era of the band.

From the red hot debut album tracks such as “Spread Legs, Not Lies” to the new anthems of “Start the Party” we are treated to a look back on the bands highs and lows as this set moves swiftly through the high second album tracks like “Children of the Night” and he difficult times of the band are shown on 3rd record with “Hope.” This cracking mix of tight rock tunes just goes to show how their hard work and persistence has paid off…. Plus all of these tracks are entwined with the classic harsh banter that these boys are now known for.

After verbally abusing a few helpless members of the audience they disappear through a veil of balloons. An abrupt exit defiantly leaves the crowd wanting more as the most pits continue to the club DJ. Leaving such high energy and with a diverse rock catalogue The Blackout filmy take their place amongst well rounded UK rock bands. However, using a well-crafted live show to conquer the various glass ceilings this band has faced, where do they go from here? 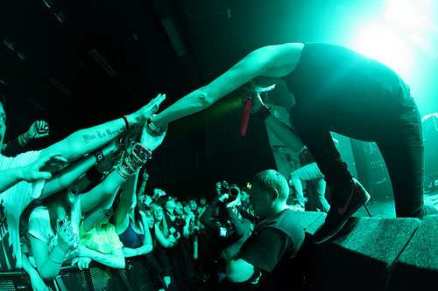 View all posts by lewisandthejibbajabba